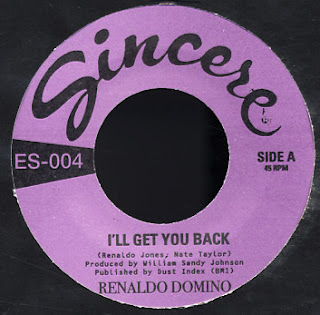 Great to see this getting released - check out Dusty Groove for copies:

Wonderful sweet soul from the amazing Renaldo Domino -- an artist who always sounds great to our ears! Both of these tracks are previously unreleased -- for some reason that still remains a mystery, given the strength of the work -- and they really continue the genius that Domino laid out during his work for Twinight. "I'll Get You Back" is a slow-stepping number with some really wicked guitar alongside the vocals -- and "Two Years" is a bit more upbeat, with a groove that's almost shagging, but a bit more Northern. Dusty Groove

The above release comes on top of the news that Renaldo will be appearing in the Numero Uno's Eccentric Soul Revue next year in Chicago plus Numero Uno have also reissued a number of his 45s on their revived imprint. You can hear Renaldo being interviewed on the Sitting In The Park radio show.