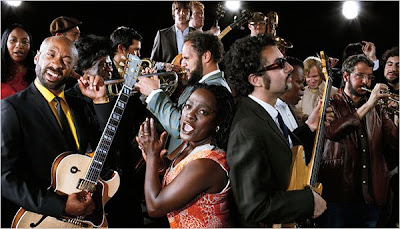 Check out this feature in the NY Times on Daptone:

In the early 1990s, while the cool kids in the New York University dorms were listening to Nirvana and Pavement and P. J. Harvey, Gabriel Roth, a Jewish teenager from California, sat in his dorm room, night after night, listening to one obscure James Brown record after another. He listened to “Dooley’s Junkyard Dogs,” a 45 that Brown cut in honor of a college-football team. He listened to Brown’s esoteric rock version of “Talkin’ Loud and Sayin’ Nothing.” He listened to “Gettin’ Down to It,” a collaboration between Brown and, as Roth puts it, “these white jazz guys — but it was really actually a cool record.” Mostly he listened to “Hot Pants,” an album that largely consisted of just one chord. It was like “some kind of strange calculus,” Roth told me recently. “Everybody playing one little note or one little beat. But the whole thing worked together.” Roth and a friend would sit in his dorm room and listen to “Hot Pants” for hours on end. They’d listen to one side of the album several times in a row, and then they’d turn it over and listen to the other side.”