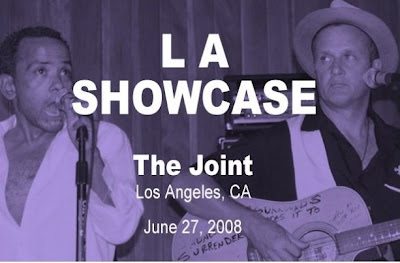 John Boutte & Paul Sanchez in LA
The Dark End Of The Street forum tipped me to an exciting new project in New Orleans led by Threadhead Records:

It was noon on May 1st, 2007. Paul Sanchez and John Boutté, two well-known New Orleans musicians, played together as a duo for the first time. It was an acoustic set at a private, outdoor charitable event for the Threadheads, fans of the New Orleans Jazz and Heritage Festival, on a Tuesday afternoon between Fest weekends.

The set was magical in so many ways that it prompted only one question. When would the two of them put out a CD together? Paul’s succinct response, with his sweet smile, was, “Well, that would take money.”

And thus began Threadhead Records, an unprecedented non-profit record company formed out of the love for New Orleans and its music.

Each CD project is funded by the fans themselves and is paid back by the musicians with an additional 10% charitable return to the New Orleans Musicians Clinic. The musicians own their own work; Threadhead Records does not sign artists, nor are we involved in creative decisions or ownership of songs. We exist solely to help musicians get their CDs made. No more, no less.

It’s a truly wonderful partnership
Check out the Threadhead website for more details
Posted by Keeping Soul Alive at 2:28 PM