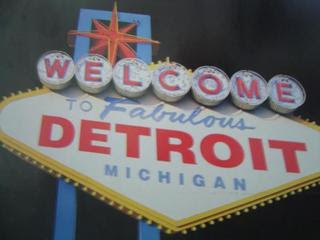 My old mate Rob Moss has his latest installment of I Love Detroit over on Soul Source:

The Chinese zodiac 2008 is the Year of the Rat. It is supposed to be a time for hard work, activity and renewal. A time to begin a new job, get married or start new enterprises. What a load of tosh. In reality, the only good thing to have happened this year, that even slightly resembles these predictions, is the election of Barack Obama - and that has occurred in an atmosphere of financial instability, political insecurity and social erosion. The eventual release of the beautiful Gloria Shannon record deserves a mention too – but that’s it.

The UK rare soul scene, once so vibrant and creative, has degenerated into an almost exclusively ‘oldies’ culture promoted by corporate pirates, hucksters and sanctimonious parasites. And the ranks of those innovative souls who actually created the music we love, not to be confused with those delusional windbags who claim to have ‘discovered’ it for us, has been devastated by death and sickness. The great, the good and the golden have all passed on this year, and Detroit has been badly affected.

In the past few months Pervis Jackson of the Spinners, Levi Stubbs, Norman Whitfield, Nathaniel Mayer, Joseph Pruitt of the Fantastic Four, Richard Wylie and Mike Terry have all been taken from us. For me, the loss of Mike Terry was the cruellest blow. I first met Mike in 1993. I had spoken to him by phone at his home in New Jersey but visited him in Detroit, when he moved back the same year. From the outset, he was friendly, warm, kind and helpful. With his late wife Liz, we spent many hours reminiscing about the old days at Motown and all the other Detroit studios he had worked at. It was only later that I began to realise how extensive his session work actually was. He spoke about Philly sessions with Jimmy Bishop and Jesse James, flying to New York to record, Chicago recordings on a variety of mainly Chess/Checker label artists, his sessions as a top-flight arranger throughout the country, the Pied Piper production company and the scores of songs he had written. As time went on it transpired that he had played on records like ‘Ain’t nothing but a house party’, ‘The horse’, ‘Here I go again’, ‘Mr. Big Shot’, ‘Girl across the street’ and scores of others.