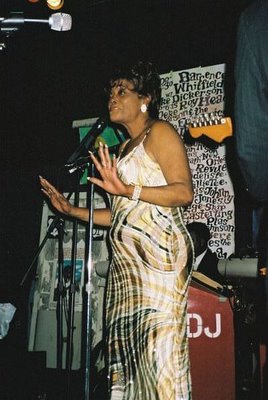 Betty re-emerged last year with fine performances around the US including headlining at the 2005 Ponderosa Stomp in New Orleans where I caught up with her.

I will be writing about meeting her and the 4th part of my trip down in the Delta for the next edition of the NSoul - you can see parts 1 to 3 in my Dark End Of The Street blog.

Yesterday, she informed the Southern Soul Group, of she is a member, that she is writing a book of her life and she reminisced about an incident when Wilson Pickett carried Jackie Wilson off the stage at a concert when Jackie was attacked by a fan.

Meanwhile, we are still waiting for the new CD which Betty hoped to release in the Fall of last year. Apparently, she didn't feel that the material that she recorded last year was good enough. She is heading back into the studios again this week with a different band and a new set of material to try again.

Check out Betty here.
Posted by Keeping Soul Alive at 11:25 AM