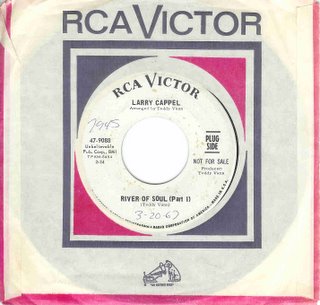 I had to feature this 45 seeing that one of my blogs is named after the song title! I first heard this on a UK compliation called "Just A Little Bit Of Soul" back in the 70's. A beautiful track influenced by Sam Cooke and Johnny Taylor from his SAR days which tells the story of a river which contains the tears of his mother, brother and his own tears. It is has a simple backing with tinkling piano and quite wonderful chorus which provides a backing for some wailing similar to Bobby Harrison.

The song has religious connotations but there also seems to be a political element with the mention that the tears he shed are through ploughing the field. The river of soul seems to be a symbol for renewal and hope and this is pursued in my own blog of the same name which you can find here. The song fades away and you are left wondering what part 2 held and whether somewhere in the RCA vaults a tape exists of the 2nd part.

The B-side Hush, Hush is a great swinging song which has it's roots in Sam Cooke's later RCA material with a bongo driven beat with a strong chorus and just keeps building with some fine singing from Larry.

Following on from the African Beavers post someone has said that they think Larry Hale was in the group with Tony Fox but I cannot verify that and that Larry Hale was also Larry Cappell again I cannot confirm that either.
Posted by Keeping Soul Alive at 3:03 PM