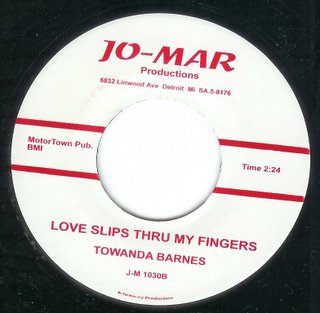 Last year, I attended with my mates Kev Horsewood and John Clement a soul night On The Real Side at the Orwell, Wigan. As ever, there were a few dealers selling records and one of the sounds that Kev picked up was the above side by Towanda Barnes.

I had seen this listed on Ebay and several other sites but wasn't sure of it's origins or legality. I held back and Kev decided to buy it! I had known from collector's mythology starting in the late 70's that there were many versions of Love Slipped Through My Fingers. One version by Sam Williams on Capitol was a huge sound from the late 70's onwards on the Northern Soul scene in the UK.

Later, in the year when I began the blog entries on Johnny Brantley productions, I was sitting around with Kev and John chewing the fat about versions of Love Slipped Through My Fingers. John reminded me of the fact that Johnny Brantley had issued another compilation of Ohio Players early material which included Love Slipped Through My Fingers which has also subsequently appeared on a few Northern Soul compilations.

We decided to dig the Ohio Players version out and to our surprise the track didn't feature Dutch Robinson as we had always thought but Gloria Barnes!!! I couldn't believe that I had missed that over the years!

I am still working on further blog entries on other Johnny Brantley productions and will be publishing ones on Jimmy Norman, George Scott, Sam Williams etc in the near future - so watch this space!

Posted by Keeping Soul Alive at 10:07 AM