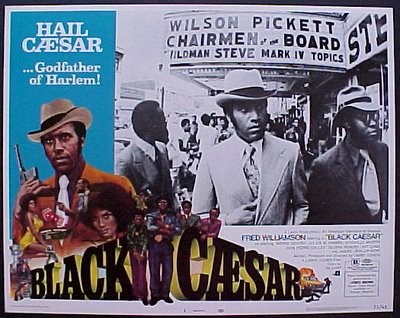 I was recently re-watching the Blaxploitation movie Black Caesar and had forgotten some of the fascinating sequences when Fred Williamson's character walks through the streets of Harlem with his gang. What's interesting is that most of the sequences were not staged with extras but shot with the actors simply walking around the streets.

In one sequence, the gang pass the Apollo Theatre and as you can see from the above film poster; Wilson Pickett and Chairmen Of The Board are top billing. However, for rare soul fans the added interest is that The Topics and Mark IV are supporting acts. This would have been about the time that both groups were on the Mercury label.
Posted by Keeping Soul Alive at 8:35 AM