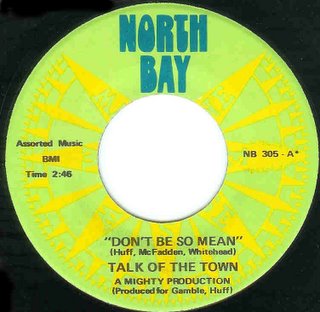 Friday brought more sad news with the death of Gene McFadden from cancer at his home in Philadelphia.

You can read an obituary here.

Today, I have chosen to remember both Gene and John Whitehead his writing partner who was tragically gunned down outside his home last year. They began their careers in a group called The Epsilons but the records I treasure by them are their recording as the Talk Of The Town especially their 2 outing on North Bay. These recordings came before all their classic songs for Philly and still had one foot in the 60's with a rawness missing from their later work.

Don't Be So Mean has a distinctive bongo opening which was used later on other Philly recordings. There are some fabulous harmony interplays between the 2 guys over a back drop of swirling organ and they come on like John Colbert and Norm West of the Soul Children. The song is so catchy like most of their classics and I just love the backing singers repeating the chorus of "Go Ahead With Your Bad Self For Me"!!!!.
Posted by Keeping Soul Alive at 2:25 PM