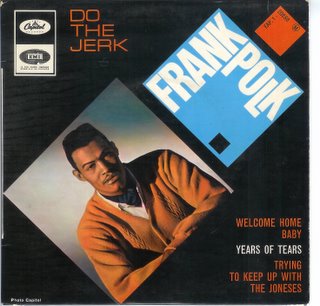 I'll confess that one of my obsessions is collecting European picture sleeve releases of soul sides. In most cases, I already have the US vinyl but the magic of the European release always captivates me. The French were probably the masters of the picture sleeve and always seemed to use photos of artists which never appeared anywhere else.

One French EP which had eluded me was the 4 track Frank Polk Do The Jerk on Capitol. I had always wanted this since I first found it existed when Richard Searling used to play Keeping Up With The Joneses from the days of his old Sunset Radio show out of Manchester in the early 90's. I eventually picked this from a UK source on Ebay late last year.

Frank Polk is a good singer who I know little about and who had at least 5 45's on Capitol around 64/65 probably recorded in LA and then seems to have disappeared.
Posted by Keeping Soul Alive at 2:02 PM