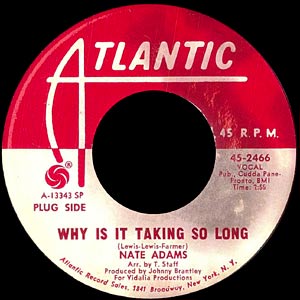 The second Johnny Brantley feature of the day and I owe Early Hendrix for providing clues on Nate's recordings. As with Sam Williams, I have no biogrphical detail on Nate.

Atlantic Why Is It Taking So Long/I'm Gonna Be Good

Both songs are written by Lewis, Farmer, Lewis and arranged by T. Staff. Why was also recorded by George Scott on Maple with George edging it for me on the vocal stakes. Why is a lovely lilting song with some jangly guitar and girly backing with a great break while Nate pleads to his love over a throbbing bass run. Yet another very soulful song from the trio of writers. I'm Gonna Be Good is a raucous mid-tempo beater. I cannot find another Johnny Brantley produced version of this song.

According to Early Hendrix the session also included the following tracks:-

This certainly made it to acetate because I have heard this version of the Hermon Hitson classic via my friend Martin Barnfather aka Soul Sam. This sounds like the original backing track with some additional girls singing "Can't You Dig" minus Nate's vocals. I can't recall for the life of me whether there was a vocal as well!

Also covered by Marion Farmer on Tower 417 and the Ohio Players on their collected Compass recordings album First Impressions.
Posted by Keeping Soul Alive at 2:11 PM