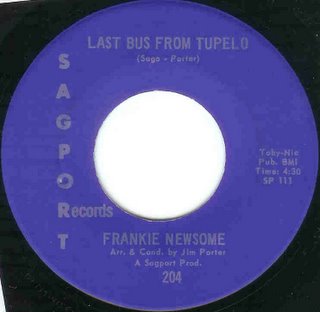 I got a mail last night from my friend Fredrik in Stockholm with his new email address and his service provider is called Tupelo which he figured was a cool southern soul name to have!

It reminded me of the tragic Last Bus To Tupelo sung by Frankie Newsome on Sagport. Tupelo is about half way between Memphis and Birmingham, Alabama and the song tells of Frankie leaving the town and heading North to Chicago to get away from the cotton plantation.

It's a wonderfully evocative song opening with a swirling organ and the sounds of crickets and baying dogs before Frankie begins his sad tale. He is looking back on his life in the country while in Chicago. He tells us that he left the country because he'd had enough and he couldn't stay another day on the plantation. He calls where he worked a wretched farm where he slaved all the day and he didn't care what the boss told him any more. He believes his father was a fool for working his 40 acres with his old mule from dawn to dusk. He dismisses his schooldays and has forgotten everything he was taught and in any case the boss would turn the class out and get them to pick cotton. His mother had a heart of gold though she has endured a life of poverty.

He wants to take advantage of his soul being made free by the "man on the hill". It hurts him to go but he has no choice and has no idea where he is going. He goes to his uncle and cousin who give him money to head North to put his dreams together and he sets off at night across the fields to Tupelo to catch the bus. He worries he will get found out and wonders what the boss will say to his family but he knows he's got to go what ever the consequences.

Cold and hungry he reaches Chicago and is overwhelmed by the noises and sights of the city. He finds a room but realises he'll need more money to eat and clean his clothes and shoes to wear. He gets a job through a guy across the hall called Mac in the steel mill. However, before long the dream starts to go sour as he gets bills for everything including income tax! Now he has sold his soul to a new boss! He meets a women but though she teaches him to be a good lover it comes with a price. She wants to take more of his money each day and he ends up stealing to make ends meet. Eventually, he ends up back on the streets homeless and penniless and as the song fades he tells us that he is thinking of getting the bus back to Tupelo.

It is hard to think of another song as bitter as this - Clarence Reid's New York City, the songs of Sam Dees or perhaps Larry Saunders come to mind. Perhaps written at the beginning of the 70's and reflects the plight of the people whose dream of the promised land was disappearing into poverty.

The lyrics are the best part of this song but Frankie's emotional rendition of them with the occasional impassioned scream added volumes to the message of the song. Plus the backing which again reminds me of the synths used on the Birmingham recordings of Sam Dees alongside the steady organ and mournful guitar.