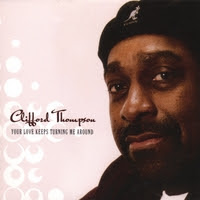 One of my favourite tracks of the year has been Clifford Thompson's Back Don’t Hold Back taken from his CD on Goldwax Your Love Keeps Turning Me Around. I know little about Clifford except what is on the CD Baby blurb:

Clifford Thompson was born in Carrabelle, Florida and moved to Columbus, GA to be near Fort Benning Army post while his father served in the military. At a very early age his love for music started to bloom while listening to his older brothers sing due wop in the back yard.

In 1975 the group Asia Addicts" was formed and became a popular singing group in and around Columbus GA. They performed at the local nite spots and met popular singers such as the late Johnny Taylor, The Staple Singers and Archie Bell and the Drills. Listening to their style of music Cliff decided that this was his dream. The rest is history.

Go and have a listen to snippets of the album on CD Baby.