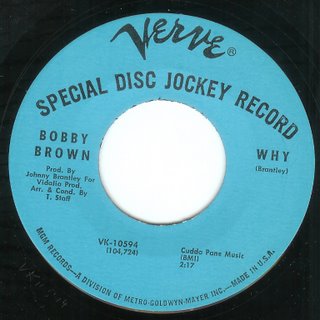 I had this 45 on the back burner of my on-going Johnny Brantley research and when I dug it out the pieces just slipped into place. I compared this track with the Ohio Players version on the First Impressions album and they were identical. I had already decided that the lead was Bobby Dixon aka Bobby Lee Fears so that meant Brantley issued the 45 on Verve and for whatever reason credited the song as "Bobby Brown". Another piece of the Brantley puzzle solved!!!

The funny thing is that I had this 45 for many years and never made the connection until I had the chance to compare the voices with Bobby's other 45s and the Fabulous Denos 45s.

Next up will be Bobby's ABC/Probe cut
Posted by Keeping Soul Alive at 7:44 PM