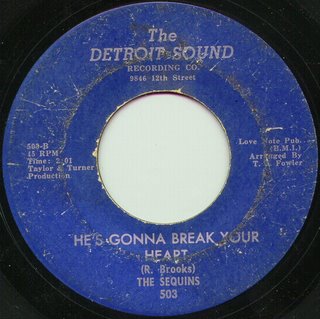 In this post, I am sticking with the theme of featuring the flip-sides of Northern classics. The above track is the other side of "Try My Love". According to the book "Soul Harmony Singles", there are a few groups with the name the Sequins. There was a group who recorded for Ascot in 1964; another early group with releases on Terrace and then the group who consisted of Ronnie Gonzales, Linda Jackson and Dottie Hayes who recorded for Gold Star, Crajon and Fantasy.

The mystery of the group who recorded the other Northern favourite "A Case Of Love" on Renfro in 1966 was cleared up in Kent's excellent Renfro Story. In the CD notes, Ady Croasdell told the story of the West Coast group and confirmed they were a different group to the Detroit Sound and Crajon groups. He also identified other Sequin groups who recorded for A&M, UA, Boxer, Cameo, Del-Fi and Red Robin. Ady was unable to say whether any of these versions of the Sequins had links to the Detroit Sound group.

There has been some discussion about the Detroit Sound label over on Soulful Detroit in the past. The label with the 200 series numbers was owned by Irv Stiener & the earlier & shorter 500 series was probably owned by a J. Taylor. There have been suggestions that J. Taylor was the New York record producer but I think that is doubtful. The 200 series features sides by Michael John, Detroit Vibrations and Little Sisters. A discography of the 500 series is incomplete and on Soulful Detroit links were made in the numbering to 45's on Awake and Tay by the Shane Hunter, Eddie Parker and The Brooks Brothers. To add to the confusion, there is another label of the same name featuring the The Showstopping Supersonics but it would appear to be another company owned by Dr Kyle, another Detroit record entrepreneur.

The credits on the label support the idea that Taylor and Turner owned the label because their business, according to the 1966 Detroit Yellow Pages, was based at 9846 12th Street. There also a link to the Brooks Brothers on Tay because "He's Gonna Break Your Heart" was written by Richard Brooks who, with his brother Fuzzy, formed the Brooks Brothers.

Soulful Detroit remains a wonderful treasure trove of information and I jaust hope it all backed up somewhere because it is priceless!!!
Posted by Keeping Soul Alive at 5:04 PM