Twans Darling Tell Me Why Dade 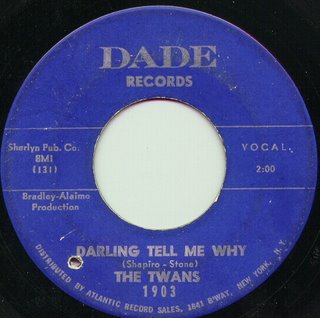 The flipside of one of the ultimate Miami collector's items "I Can't See Him". For many years I had never even seen an original copy nor had I heard the other side. "I Can't See Him" was one of those magical 45s which was played on the Northern Scene back in the late 70's.

If I recall correctly, it was the Northern Soul DJ Ian Levine who found this side on his infamous trip to Miami in 1975 and the 45 entered in soul mythology. Even though the 45 had Miami gurus, Brad Shapiro and Steve Alaimo at the helm; it disappeared into oblivion even with Henry Stone's Dade label being distributed by Atlantic.

I don't how many copies surfaced but there must have been sufficient because the 45 broke out from the Blackpool Mecca , the historically important Northern Soul venue, where Levine was spinning the 45. I first heard the record at the Wigan Casino and it became a monster during 1977.

What intrigues me is that other Dade 45's are not rare; so why did this 45 become so difficult to find??? Don't recall either if we ever did find out who the Twans were?? I don't think the group were mentioned in Jeff Lemlich's book "Savage Lost" dedicated to Florida music except in the discography. I think I also forgot to ask Clarence Reid when I interviewed him who they were!!! Henry Stone drops by Southern Soul list on occasions so perhps we can ask him there!
Posted by Keeping Soul Alive at 5:42 PM