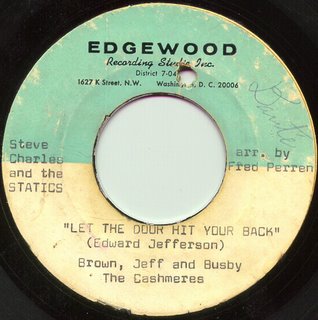 I have just hit upon an exciting addition to the web resources on soul music called DC Soul which documents soul music from Washington, Baltimore and Maryland.

Anyone fancy doing one for New Jersey, San Francisco or St Louis????

I have decided to feature the Cashmeres monster on an Edgewood Studio acetate for this post to represent DC Soul. DC Soul tells us that the Edgewood Recording Studio was located on K St. in Downtown DC. Apparently, the Edgewood recording studio hosted many travelling stars and local labels e.g. Shrine, HEM etc. The studio was open until the early 70s when many engineers broke away to form their own studios. The Cashmeres was issued on HEM which also used the studios to cut acetates as did many other record labels.
Posted by Keeping Soul Alive at 9:54 PM