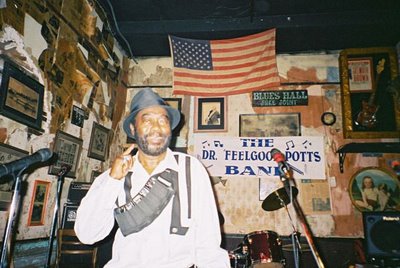 I have featured Beale Street several times in my Dark End Of The Street blog and I was searching You Tube for footage taken on You Tube when I came across a clip of Robert Potts who I have been fortunate enough to catch in Memphis.

The last time I saw him was in April 2005 with my wife Barbara. We were staying Downtown on Front Street and though we had been up for 24 hours we couldn’t resist hitting Beale Street, which is just around the corner from where were staying.

A quick call to my long time friend and Memphis resident Emjay Diana and we were soon eating Memphis soul stew with her in the Blues Café.We hung round Beale Street for a few hours and though it is sometimes bit predictable you can often be surprised who turns up. As we left Rum Boogie Café, after catching the excellent Billy Gibson Band, I noticed in the next door bar window a sign advertising Dr. Robert “Feelgood” Potts.

Feelgood is a long term Memphis performer who has recorded several good 45’s and a CD for Ecko and is the father of Sheba-Potts Wright, who caused quite a stir with her first Ecko CD. So though very tired, we decided to go in and were entertained to a strong set of soul influenced blues which included tracks from his latest CD “Blues Me 4 U Lose Me” on RPL which he was selling. Many artists including Feelgood don’t get paid for playing sets in Southern clubs and rely on tips from the crowd and selling their own CDs or CD-Rs. I got the chance to play his CD the next day while driving round and there is a killer slowie on there called “Slipping Around”. Feelgood went on to demonstrate that you can always be surprised on Beale Street as I said when he told me that I should have come earlier because I would have seen his daughter Sheba singing with him!