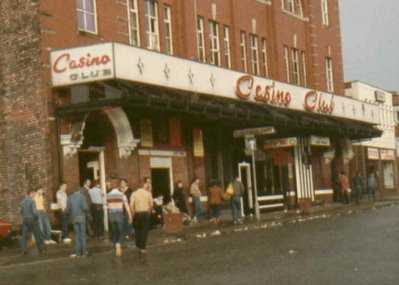 This is the 300th post on In Dangerous Rhythm since I began the blog back in August 2005. To celebtate 300 posts, I thought I would indulge in a little nostalgia after I recently discovered the whole Wigan Casino documentary on You Tube. Wigan Casino was one of many all-nighter venues associated with Northern Soul in the UK over a 35 year period and though we could argue whether it was the best or most influential; it is undoubtedly the most famous and the name of the club is synonmous with Northern Soul.

I suppose Wigan will always remain dear to my heart because of the sheer excitement generated by the venue. The year 1977 will always be my year of the Casino because I hardly missed a night that year. During the first six months of that year, I would always go to the nighter with my then girlfriend Christine. The excitement would begin for us on the morning of the all-nighter as used to hang around my house playing 45s or we would meet up later after catching up on some sleep.
The anticipation would grow as soon as we entered Lime Street Station in Liverpool to take the last train to Wigan. In the mid-70's there was always a small gang of Northern fans congregating around the ticket barrier waiting for the train. We would chew the fat with the gang finding out where we could score some speed or finding out who had been busted or what sounds were going to break or just laughing and messing around to kill time. As the train made it's way from Liverpool to Wigan it stopped at every station and at each stop more Northern Soulies would get on especially at stops such as St Helens. As the gang grew and began to take the train over, so did camaradie and the magic of another Saturday nighter built up.
As we hit the main street up from the station, most Wigan people were spilling out of the pubs to go home but our night was just about to begin.
Later, we would start going to the early evening sessions at Mr M's, a club within the Casino, which held pre-allnighter sessions for the diehards to get in the mood. Every month, Christine and I would also go to the Friday night oldies nighter which was always a packer before coming back on the Saturday for the usual weekly nighter. You needed stamina and speed in equal quantities to go to work on Friday morning and go 2 days and nights without sleep and because you couldn't sleep because of the effects of the speed you didn't get to sleep until Sunday night!
The scene then had almost secret semi-revoltionary quality which had almost cultish/religious overtones both in behaviour and language. We considered ourselves the chosen ones and everyone else was divvies. The lifestyle meant sacrifices in terms of relationships, sleep, health, money etc. I spent all my money on sounds and drugs all centred around the Casino. Outside of Northern, nothing else mattered and it caused me lots of problems with family and work who looked upon me as some crazed fool.
I still get shivers when I hear the opening bars of the MVP's "Turning My Heartbeat Up" which begin the video below. That record sums up the adrendaline mixed up with ampthetamine rush as you climbed the stairs of the Casino to reach the ballroom. The music pounding out of the speakers welcomed you home once more for 8 hours of heaven.
I recall buying the MVP's with money gathered from all over the place; dinners missed in the week, walking instead of getting the bus to work or trawling junk shops to find 45s to sell at the Casino. All the monies raised would buy me a top sound every week and every week I would have to deal frantically to get there - Lenny Curtis, Ronnie McNeir, Mel Britt etc were all obtained through sweat and sacrifce to be cherished on the nights waiting for the all nighter to come around once again.
My mind always comes back to the people who didn't make it or the loves lost because the scene could be destructive. The music will always be wrapped up with Christine or the likes of Big Phil who tragically died and my memories of them lie scattered in a warm place in my heart which will always lie with the Casino.
The video below was filmed in 1977 and includes footage of the Casino over 2 nights in March of that year. I was there both nights which was a strange experience because they kept the main lights on to film the dance shots which spoilt the atmosphere! Some of the true diehards saw the making of the TV programme as an intrusion into their secret lives and an exploitation and refused to turn up on those nights. What we are now left is a snapshot of time which looks very bleak and is only warmed up by the music. Dave Withers, the guy who does most of the talking was a good friend of mine at the time and we would sit for hours in the Casino's record bar talking music. I saw Dave briefly in New Jersey earlier this year and he is still dedicated to the music.

Posted by Keeping Soul Alive at 9:08 AM