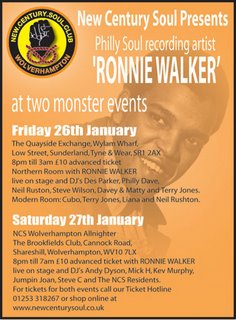 Ronnie Walker is due in the UK for his first gig outside of the States. Here are the details: 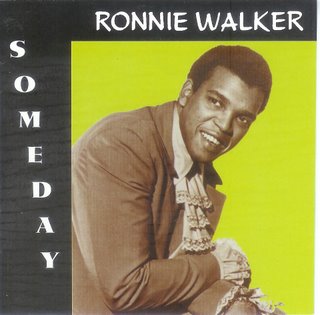 I met Ronnie over in New Jersey earlier this year and enjoyed a short chat with him. It is good to see that he has got the chance to perform in the UK which he told me was one of his big ambitions.

Ronnie's falsetto voice was one of the first of those magical voices which epitomises the birth of Philly Soul which brought a new richness to soul music in the late 60's. The Sound of Philly would reach its zenith under the aegis of Gamble and Huff in the 70's.

Ronnie began is career at the age of 15 after he was introduced to the producer Phil Gaber. He then began writing and recording at the Impact Studios on Caster Avenue in North East Philly. One of his first songs was "Trouble" co-written with Glen Williams was recorded by the Agents and has subsequently become a big Northern Soul favourite and I guess he will be singing this song on his visit! He recorded the song himself on acetate back in 1965 but we had to wait until 2000 before it was issued on Impact Sound.

Ronnie's first release "I'm Saying Goodbye"/My Baby Doesn't Love Me Anymore was for Bell in 1966. He followed it the next year with his biggest hit "Really, Really Love You" for Phillips. I have featured below one of his best songs "Precious" which is typical of the rich Philly soul I mentioned above. You can hear this sound in the songs of Eddie Holman, The Ethics and other groups as producers such as Phil Gaber, Bobby Martin, Morris Bailey and of course Gamble and Huff developed the sound. "Precious" was recorded at the Sigma Studios in 1968 and released on Vent. The song features the embronic MFSB players; Earl Young (drums), Ronnie Baker (bass), Norman Harris (guitar), Bobby Eli (guitar), Leon Huff (piano), Tom Bell (organ), Vince Montana (vibes) and Larry Washington (congas). The song was produced by Bobby Martin and Phil Gaber.

Ronnie went on to record further smooth soul classics for Vent, ABC, Paramount, Gala and Event. His songs were recorded by a number of artists including Brown Sugar, Charo, Double Exposure, Fat Larry's Band, Sunny Gale, Goody Goody, Cecil Parker, Esther Phillips, Dave Schultz and Carole Williams. He also has a long career in music with various groups such as Techniques/In Ecstasy/Tangent/La Rue working the US nightclub scene including the Casinos of Vegas and Atlantic City.

Several of Ronnie's 45s for Phillips, Vent, Nico and Paramount were collected together and released with unissued cuts on a CD "Someday" by Philly Archives back in 2000 and which is still available via Ronnie. 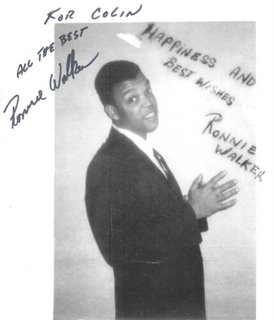 Ronnie sums what music meant for him in the notes to the CD "Someday":

"My whole life changed when music found me. The love of it has given me so much joy and pain. I always believed that I was given the chance to record the thoughts, the sights and lessons that I learned so that they could be shared and passed on through the music that possessed me. I may not be able to pass on as much as I wanted but if any of it touched you then I feel was my part and I thank truly those who helped. I am sorry there wsn't more but who knows maybe someday."

Impact Sound Trouble/Why Did You 9/00