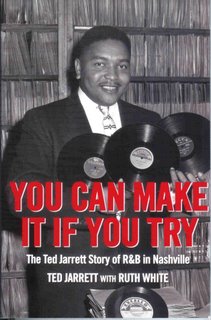 I have been meaning to post about this book since first reading it during the summer while I was laid up!

An interesting and engaging read about the Nashville music scene from a man whose name is synonmous with that city's music history. The book is particularly good when Ted is describing his upbringing and how his determination to succeed paid off in an industry which takes no prisoners.

I was once fortunate enough to see the man perform backing Earl Gaines, Roscoe Shelton and Herbie Hunter who all get mentioned in the book.

As yet, none of the video from the Nashville TV soul shows The Beat or Night Train with Ted's "stars" has appeared on You Tube except for the Avons featured here on a track I don't think they recorded but were simply covering for the show: