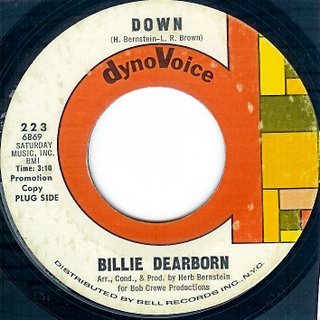 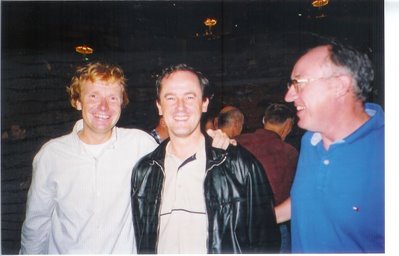 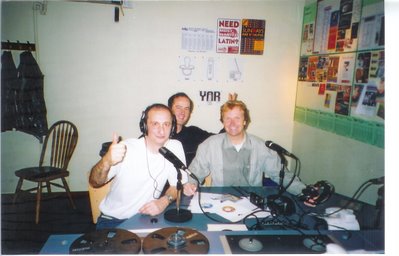 Colin with Hans & Harry on Groove FM Radio Amsterdam
Why you like some 45s more than others 45s is sometimes all about place and time. Music listening is a complex form, Billy Dearborn's 45 was conceived in mid 60's NY for a certain market but by early 2000, the 45 takes on a new meaning for the listener i.e. me as the collector.
The meaning, I have given the record, is based for me on a cool Sunday afternoon in Utrecht at the home of Dutch collector Tom De Jong. We used to get together after the Utrecht Blues Estafette, to play 45s and discuss music. Tom played the Billy Dearborn's 45 and I thought OK I like it but the next day it took on more meaning.
Hans Diepstraten and Harry van Vliet, who run a weekly soul music radio show on Groove FM called Fingerpoppin' Soul , invited me over to play some 45s. At the end of my session, Harry played the Billy Dearborn track. In the late night session, after a few beers in downtown Amsterdam, somewhere high above the Rembrandtsplein in rooms over an Art Deco ballroom, the 45 transform into a paen for a lost moment. The words of the song fuse with the late night session, and the fact that it was my last night, after several fun filled days in Holland and I was return home the next day. The song reverberated around my head as I hit the quiet streets and walked back up the Utrectstrasse to my hotel on the Prinsengracht. "Down" whirled around my head and though I had the track on CD-R, my only thought was to have the magical vinyl as soon as I could locate a copy. A month or so later Ebay provide me the opportunity to ge the record.
Then the 45 changed meaning again because as I entered a very difficult period of my life work wise, the record summed up other meanings - feelings of potential loss and concern mingled with the feelings of happy time in Amsterdam. I played it so much that it sank into the consciousness of people around me and now it's meaning developed further because the 45 struck a chord with my wife Barbara. "Down" became one of the first 45s she put on her computer and I would often hear it drifting a long the landing in the house from her office while she typed, followed by Lainie Hill, The Supreme's "Stormy" or Marie Knight's "A Little Too Lonely". Now the record had become one which had meaning for both me and my wife as it transmuted into a 45 we associated with closeness and longing brought on by our joint concerns about the future.
Back to the mid-60s when the record was recorded, takes us on a trip to the Brill Building in New York, where the song was probably conceived and it must have been recorded at one of the many studios in the vicinity of the Brill Building. Herb Berstein also worked his magic on the Lainie Hill 45 producing a sound which I totally love. Both records have a feeling of the big city with its's soaring skyscapers which hide the loves and losses in dark corridors of apartments where people lie in their sorrows away from the busy world outside.
You can catch up with Hans and Harry every week by tuning into their show on the Net.
Posted by Keeping Soul Alive at 11:20 AM