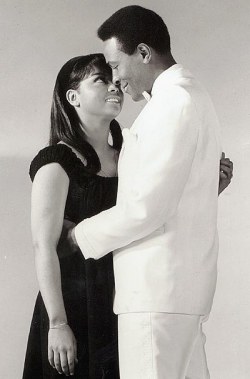 I have become entranced with the video below and it has become the most played video I have discovered on You Tube. Why? It is truly a moment frozen in time which I can relate to because this uplifting song was an anthem amongst my friends in the 60's as we hung out on street corners.

The video clip takes the song to another dimension throwing up all sorts of fantasies about Marvin and Tammi and a desire to be like them - they look so together and perfect and what a publicity vehicle to sell music to the masses. I want Tammi and want to sing like Marvin - an aspirational conundrum given the complexity of reality and what eventually happened to both of them with Tammi's premature death and Marvin sinking into a drug induced oblivion and the eventual victim of patricide. There is enough there for a Shakespearan play but we are left with images whose transience is only further embellished with the death of Tammi within months of this video being made.

Therefore, we must treasure Tammi's every nuance ranging from the roll of her eyes under the false eye lashes; through her cheeky grins to the rolling of her arms to accentuate her running to Marvin's arms. The song maybe lip-synched but that doesn't mean that she didn't put feeling into the act which just captures the whole essence of the song and makes us want to dash out to buy in to the dream.

No wonder this soul clip is one of the most viewed that I have come across because once you watch it you are hooked in the same way that my wife was when I showed it to her!

It doesn't surprise me then they called Tammi's solo album for Motown - "Irrestistible"!