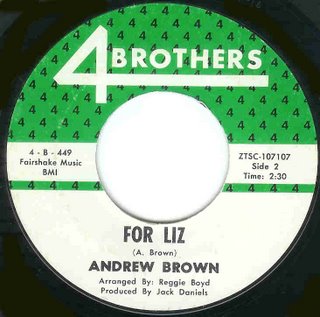 I like my guitar with plenty of reverb and you certainly get it with this crunching piece of music partly influenced by Johnny Guitar Watson. This guitar led instrumental is further enhanced by the strong Chicago production from Jack Daniels.

One of those sides that I find so uplifting that blow the snow from the paths of your mind on this late winter's day. Perhaps I am also influenced by the fact I was mad about a girl called Liz in the 70's!

We will shortly be treated to a box set of Andrew Brown's sides from the Dutch company Black Magic which I eagerly look forward to seeing.
Posted by Keeping Soul Alive at 1:59 PM