Welcome To The Newsroom 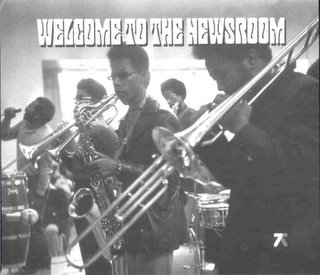 While doing a search on the Net for information on Lonnie Hewitt, I came across this CD on a Frisco label called 7 Bridges Recordings. The CD came out in 2002 and features 13 previously unissued tracks by Electric Church, Flight and Paul Tillman Smith. The first 2 were unknown to me but I am familiar with Paul Tillman Smith for his work with Vitamin E, Bridge and Park Place.

The CD features a host of Bay Area musicians including Lonnie Hewitt, Ray Obiedo and others. However, the killer for me is that 2 tracks "Back Here Again" and "Ready To Live" have Freddie Hughes on lead vocals. I knew that Freddie has worked with Paul Tillman Smith on countless projects since the early 70's and I knew that some of these recordings had remained unissued. "Back Here Again" was recorded in 1974 at the Fantasy Studios in Berkeley and "Ready To Live" was recorded in San Francisco in 1975 at Funky Features Studios. There is also a futher bonus in Freddie's former partner in the Casanova 2, Wylie Trass providing a vocal on a track "This Morning, Your Sorrow".

You can still get the CD from 7 Bridges - mine arrived within a week.

Paul Tillman Smith did have a website for his Park Place band but sadly I can no longer find it on the web. One of the problems with the web is information can come and go and this was before I started saving web pages! Unlike, most other formats you cannot find it once it has been deleted!!
Posted by Keeping Soul Alive at 1:04 PM