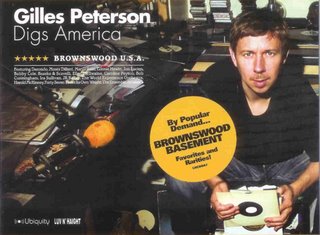 I picked this up CD from Ubiquity/Luv N'Haight mainly for the track by Lonnie Hewitt on Wee called "Ya Ya Cha Cha" which is an instrumental with a chant heavily influenced by his time with Cal Tjader.

However, there are some other goodies on there by Moses Dillard "Tribute To Wes", a guitar led sparse instrumental; Marva Josie "He Does It Better", a beautiful and seductive piece of music which I immediately fell in love with; an ultra rare piece from Jon Lucien "Search For The Inner Self" which has already become one of my favourites by the man plus there are some other interesting tracks.

Gilles also provides an enlightening set of notes but what I really love is seeing the inside of his record room in "Brownswood USA" named after the street he lives in down in the "Smoke".
Posted by Keeping Soul Alive at 7:15 AM