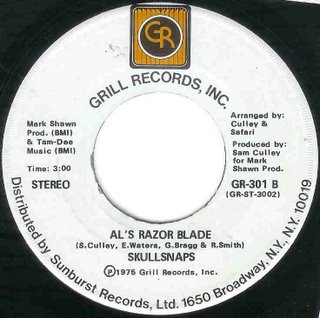 Ten12 records have been working with the original members of the Skullsnaps.

Ten 12 will be releasing a CD of the Skullsnaps music in the near future but they currently have a 12" out called "Snapped"which is a mix of some of their GSF tracks including "It's A New Day" and "I'm Your Pimp" plus some material suppied by Sam Culley of the Skullsnaps from that period and mixed down by Audio Doctor.

If you go to the Ten 12 site you can also listen to a podcast of the Skullsnaps in a three-hour interview at Ten12's HQ in 2005 before their reunion performance at NYC's Knitting Factory.

This podcast makes a nice audio counterpart to the recent article on the Skullsnaps in the February edition of Wax Poetics magazine and which I featured in a previous post.

The Skullsnaps did record after GSF and "Al's Razor Blade" is psych guitar led number which reminds me of some of the grooves Johnny Hammond laid down as it breaks into organ runs. The other side is a very good version of the Luther Ingram number"Ain't That Loving You" with an old fashined doo-woop feel. If you dig back into the Kent CD The Diplomats, a former manifestation of the Skullsnaps, you will find some excellent 60's music.

I recently found out that Billy Lamont also had a release on the Grill label as Billy The Baron & His Smokin' Challengers called "Communication Is Where It's At".
Posted by Keeping Soul Alive at 9:40 PM