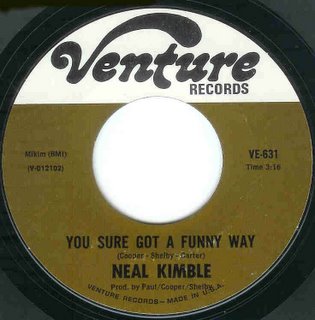 Neil Kimble is one of soul music's mystery men and though I and others have tracked down many of our heroes this guy remains elusive. The other strange thing is that people such as Vernon Garrett, Mighty Hannibal and Darryl Carter who worked with him or knew him couldn't throw much light on him either when I spoke to them about Neil. Ace Records didn't turn up any information on the man either when they issued the CD LA Happening which contains his Fat Fish recordings.

What we are left with then is the vinyl; 2 45's for Fat Fish, 2 on Venture and 1 each on Maverick and Creative Producers. I was turned onto Neil in the late 70's when I picked up a wants list from a Japanese collector and saw his name. At that stage, I had not heard of his music or of the man. When I looked at the other artists on the wants list such as Johnny Adams, George Jackson etc then I thought he was worthy of investigation and I was proved right.

The 45 featured here is "You Sure Got A Funny Way" written by Venture staff writers Dick Cooper, Ernie Shelby and Darryl Carter. This B-side is a tough side to find because most copies of the 45 are double A-sided demos of "I Consider Myself Lucky" which is a class ballad. I picked up "You Sure Got A Funny A Way" in the early 80's from the UK's Soul Bowl and it has remained a perennial favourite of mine. The 45 sounds like an after hours club jam session with a slow organ and bass backdrop with guys and girls shouting out and clapping encouragement to Neil as he does his stuff. The killer is the chorus with some strong singing from the girls allowing Neil to really let go. Unusually, it has a piano led break which picks up from the organ to lead to the end. They sure sound as though they are having a good time and I cannot recall another 45 like this one. Somewhere, I did start noting down party sounds 45's but at present on this dull wet morning my brain is yet to kick into gear and I cannot find the references!

My friend, Barry Fowden with the help of several people has compiled a discography and feature on the Venture label and there was also a article in In The Basement Issue 40 by Greg Burgess.
Posted by Keeping Soul Alive at 9:14 AM