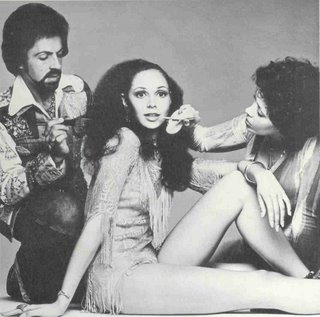 Lonette McKee Back Cover Shot taken from her 1974 Sussex album.

Dennis Coffey, the Detroit guitar genius has a new website which is well worth dropping by. Dennis has been a regular contributor to Soulful Detroit forum over the last couple of years and has shared many of his stories with members and answered plenty of their questions.

Dennis also wrote a book about his life in music entitled "Guitars, Bars & Motown Superstars" which was published by Bee Cool in the UK in 2002.

I picked out the Lonette McKee album which was produced and arranged by Dennis to illustrate the post. There are 2 tracks which I love off this album - "Do To Me" which is a light airy floater and the sublime "The Way I Want To Touch You" which reminds me of the later songs Dee Dee Warwicke recorded. Dennis brought a host of major players to the album including James Gadson, Ollie Brown, Reginald Burke, David T. Walker, Larry Carlton, Ray Parker, James Jamerson.

Lonette McKee is a highly talented actress, film director and executive producer. She performed in one of my favourite music movies the French director Bertrand Tavenier's 'Round Midnight with Dexter Gordon in 1986.
Posted by Keeping Soul Alive at 7:58 AM