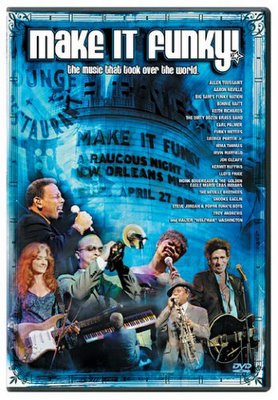 While making preparations for a visit to New Orleans in 2004 I was put in touch with Daniel Roth. Daniel was then in the process of arranging the filming of Make It Funky dedicated to New Orleans music to take place in April 2004. He invited me and my friend Nick Sands over to the making of the movie in the Senger Theatre. We spent the entire day hanging around the theatre talking to the Neville Brothers, Lloyd Price, Irma Thomas, Allen Touissaint, Dixie Cups and others. We also got to see the rehersals for the main concert which took place on the evening of 27th April 2004 plus small vignettes which they filmed to be inserted into the film. It was a fascinating experience into the making of a movie.

The launch of the movie passed me by as did the release of the DVD last fall. I have now rectified that by finding the DVD on Sony's website. To give you an idea of the content here is Sony's blurb:-

Rollicking piano. Infectious horns. Hypnotic drum beats. Rocking guitar licks. Put them all together and you've got the exuberant sound of New Orleans music! Join a world-class lineup of artists, including the Neville Brothers, Allen Toussaint, Irma Thomas, Lloyd Price, Bonnie Raitt and Keith Richards, as they slip, slide, strut and glide their way through the spicy gumbo of sounds that took over the world, influencing the course of popular music for over a century. From "Fire On The Bayou" to "Let The Good Times Roll" MAKE IT FUNKY! is a raucous tribute to the musical heritage of the Crescent City, chock full of blazing performances, fiery archival footage and red-hot conversations with the remarkable men and women who created it. Let good times roll!

You can check out a review of the concert here

The maker of the movie have also set up a website which has details of how the film was made.

Though the movie has flaws, for example in that in order to gain financial backing the makers have had to broaden the appeal of the film by using people such as Keith Richard, it still is a record of the greatness of the New Orleans musical heritage. This is especially poignant given the continued displacement of many NO artists from their home after Hurricane Katrina.

You can buy the DVD from Amazon.
Posted by Keeping Soul Alive at 11:29 AM