Ronnie Forte That Was Whiskey Talkin' 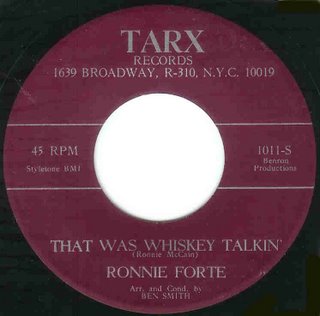 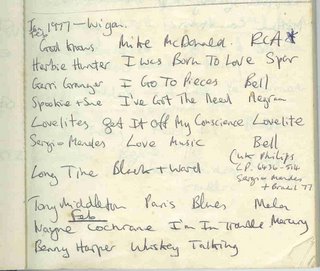 I was digging through my archives when I came upon an old book I used to keep back in 1977 to record playlists of 45s I heard every week. These entries included 45s I heard at various clubs including the Wigan Casino, the fabled home of Northern Soul in the UK.

The memories came flooding back to me as I looked through the book. Most of the memories centred around sitting or standing in the record bar of the Casino which was located in the drinks bar of the club at the far end of the hall from the stage.

The 45 which I have featured from the book is Ronnie Forte's "That Was Whiskey Talkin'". This record caught my imagination from the word go not only because of the driving beat but also because of the lyrics. The lyrics would always haunt me in the months and years after because of my own drunken ramblings whenever I succumbed to the effects of the whiskey bottle.

The first time I heard the record was in February 1977 on a cold, miserable night after the Northern Soul Oldies Allnighter held on the first Friday night of each month.The Casino was always quiet the night after an Oldies Allnighter and this night was no exception with just a few 100 in which made the place seem very empty and cavernous and the music would resound around the room much more than if was soaked up by 1000's of bodies.

I was sitting in the record bar with my then girlfriend Christine and some other friends including John Clement, Guy Hennigan and his girlfriend Margaret and Dave Withers. As usual we would be chewing the fat about the scene, records and people. Next minute the drums rolled and "Whiskey Talkin'" was pounding out of the speakers and the unknown sound lifted me off my feet - what was this record? A rush of "speed" fuelled adrenaline propelled me to the door of the bar and I looked out onto a deserted dance floor as the unknown sound cleared the floor. This was not an unknown event for a new sound before it became more familiar to the dancers. I was hooked over the 2 minutes as the sound sank in to the back of my skull to remain there for ever more. The sound was back announced as Benny Harper "Whiskey Talkin'" which I later discovered to be a cover-up to prevent the true identity of the record being discovered.

The words were written by Ronnie McCain who recorded for Triode. I have decided to transpose the lyrics for the first time for this post to expunge the demons:-

I can see by the sad, sad look in your eyes
That means that I must have said something to make you cry
You should have known deep in your heart
That I never wanted to see us part
So let me tell you before you start

The song ends with a plaintive cry as Ronnie's words seem to fall on the closed ears of his lover and like Ronnie my drinking notion ended more than one love affair.
Posted by Keeping Soul Alive at 9:13 PM