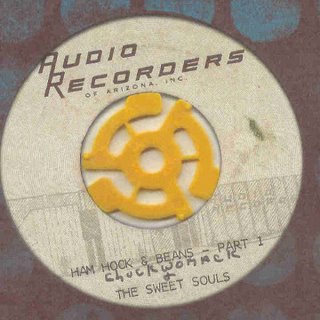 This was originally discovered as an acetate in a flea market by Justin Torres, Bay Area afficinado extraordinaire who's working on a Bay Area soul history and and who has worked on the Luv N' Haight Bay Area Funk compilations.

It is a incedibly funky piece which would appear to have never been issued from around 1971. Justin Torres actually hunted down Chuck Womack and discovered further unissued material.

Dis-Joint / Re-Joint Records was founded by Vinnie Esparza and Chris Veltri during the summer of 2000 in San Francisco, California. The idea behind the label is to release music that they are passionate about, mainly funk, hip hop, roots & dub, jazz, Afro-Cuban, Brazilian and all things soulful. Dis-Joint Records features newly or recently created music, whereas Re-Joint Records spotlights re-issues and includes another 45 by Deloris Ealy.
Posted by Keeping Soul Alive at 4:59 PM