Joseph Henry Who's The King? Daptone 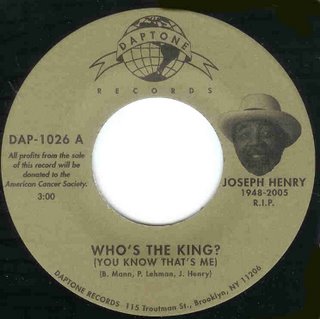 Joseph Henry sadly died in early December last year. Daptone Records have re-released this 45 that first came out just a few years back on the now-defunct NYC-based Desco label, a record label that was seminal in kick-starting interest in new funk for the new millennium with the likes of Lee Fields, Sugarmen 3 and Naomi Davis.

This is probably the best funk 45 to have come out the resurgence of interest in recording retro funk and it is a lasting testament to Joseph Henry.

Daptone have a tribute to Joseph Henry on their webpages.
Posted by Keeping Soul Alive at 5:28 PM