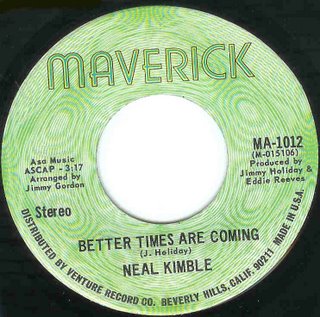 Since my previous post on Neil Kimble, I have received some feedback from Barry Fowden from Soul Cellar. He has had mails on Neil from Ernie Shelby and Dave Blumberg who both worked at Venture Records. Unforunately, they couldn't throw much light on Neil except Ernie Shelby said Neil was close to the late Clarence Paul who was one of the main producers at Venture.

However, during my conversations with Mighty Hannibal, I asked him whether he knew Neil Kimble during the time he worked at Venture and Maverick Records - his response was "Do you mean Bobby Kimble?" It appears that the Neil and Bobby Kimble are the same person as suggested in the Kent CD notes for LA Happening as mentioned in the previous post.

Hannibal went on to describe Neil as one hell of a singer and he told me that he thought the best thing ever did was a version of the Brenda Holloway classic "Every Little Bit Hurts" which remains unissued somewhere! Apparently, Neil was a nice guy who everyone got on well with and who Hannibal used to hang out with when Neil was down in LA or if Hannibal went up to San Francisco where Neil used to live. Hannibal told me that he had some good times with Neil, Vernon Garrett, Filmore Slim and some of the Venture crowd hanging out in LA at the back end of the 60's. One further thing that Hannibal told me was that Neil had a speech impediment though it didn't prevent singing his heart out. Hannibal didn't know what happened to Neil and has long since lost touch with him.

The side I picked to illustrate this post is Neil's Maverick recording which is a beautiful Jimmy Holiday song done in the style of the writer and one my favourite Maverick recordings.
Posted by Keeping Soul Alive at 5:16 PM