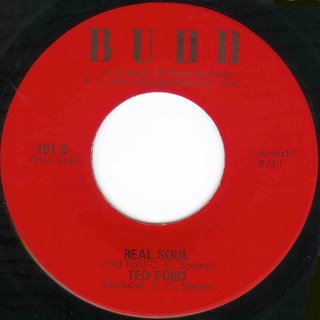 My first introduction to Ted Ford's music was on the dance floor of the UK Northern Soul scene in the mid 70's when I first heard his thumping "You Gonna Need Me". The guitar riff which opens up this 45 was a prelude to jumping out of my seat and shooting on to the floor for a 2 min 50 sec fix. Even today 30 years on when I hear the 45 it is still hard to stay still though my sciatica brings me down to earth!

Ted managed to have 2 45's issued in the UK as brand new releases back in the late 70's which is a real achievement for such an obscure artist. The first in 1977 for the Barak label "I Wanna Be Near You" sounds so strong now. Ted's second UK release in 1979 "Disco Music" was on Paul Mooney's Ardent label and one of Paul's first forays into music. Forget the title because this is a catchy real instrument beater with some synths which still sounds fresh today.

The side featured above is a side I think I picked up off Paul when he used to sell 45s in the early 80's because I enjoyed Ted's vocals. Over the years, I always played ""I Can't Give You Up" which is a terrific very midtempo side with some a strong melody and memorable horn lines and guitar riffs with some swirling organ flourishes thrown in here and there.

In recent times, I have been playing the other side "Real Soul" which I had seen mentioned on a funk DJ playlists. I have always enjoyed the funky side of things having firstly grown up in the clubs of Liverpool which unlike other Northern UK cities didn't have strong Northern Soul roots; and the fact that I spent 3 years in Brighton UK surrounded by a funk scene in the local discos which impacted on my listening tastes.

"Real Soul" starts with Ted asking us are we ready before several rolls of the drums and some tricky bass riffs and then the 45 blasts off in a JB meets the Meters type bag. Ted says it doesn't matter with it is black or blue-eyed soul as long as its real soul!

For some reason the scan looks a bit fuzzy but if you click on it then its OK!!!
Posted by Keeping Soul Alive at 2:22 PM