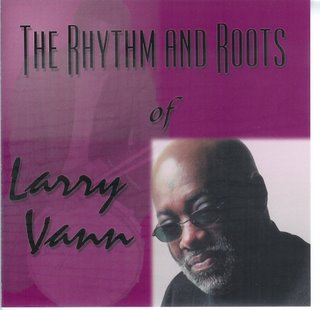 I posted up that I had been in touch with Larry last week and since then his CD The Rhythm and Roots of Larry Vann has dropped through the door.

Larry is a percussionist and drummer but he also adds his vocals. He has gathered a selection of some heavyweight friends to help with the CD including Marvin Holmes, Merle Saunders, Elvin Bishop and Brian Auger with whom Larry has worked with in his long career.

Larry wrote most of the songs on the CD with friends such as Tony Saunders with a couple of cover versions thrown in.

Here's A Little Groove For You

This is a lovely little groover in a late 70's jazz funk vein with Charles McNeal laying down some meandering sax over Larry's percussion. Vickie Saunders and Larry repeat the refrain "Here's A Little Groove For You" which makes the song so catchy. Marvin Holmes plays guitar on this tune and the whole song just gets under your skin!!!

Party Til The Morning Light

This has a more choppy beat with nagging guitar from Tim Landis throughout. Larry lays down the main vocal before a timbale led break from him. The backing singers then take the song into a party mood.

Summertime In The Big City

This piano led chugger with interlaced chants from Larry and "The Kids" featuring Larry's wife Yolanda is an atmospheric piece of music which recalls hanging out around the Bay. The killer is the trumpet solo from John Turk another veteran Bay Area player.

The groove slows right down with this sensous jazzy number which opens with some lovely alto sax from Charles McNeal. Vickie Saunders's sultry vocal interplay with Charles's sax make this a number for getting hot with your lover!

We get to hear Larry's full vocals on this mid-tempo song as he tells the tender tale of falling love for the first time. Carl Lockett lays down some nifty guitar runs as the song builds to the fade.

This is a complete change of mood from the jazzy tinged first 5 tracks as Larry goes into a bluesy bag with the tale of Hero which features Elvin Bishop on guitar and Merle Saunders on organ. I love this tale from Larry which has really grown on me after a few plays.

Happiness Is Just Around The Bend

I must be honest and say that I had forgotten that Brian Auger wrote this song having long been familiar with the Main Ingredient's version from the early 70's. Brian Auger is featured on this version playing a Fender Rhodes solo. The song is propelled along at a fast pace with plenty of strong percussion and bass before Auger's break. This song probably best demonstrates Larry's drumming style which has seen him work with people from the Whispers through to Merle Saunders.

This quiet song has some strong vocals as Larry lets himself go over Carl Lockett's acoustic guitar. It also has a fine organ break from Ira Walker who co-wrote the song with Larry. There's also some effective double tracking of vocals towards the end.

This is straight blues with Carl Lockett laying down some fine rhythm guitar blues runs and Larry beats those skins! Larry tells a story of a fight at Sweet Jimmies Club in Oakland - I'll have to ask whether it is true!!!

This is the second cover with Larry doing a fine version of the Jimmy Cliff song. An acoustic song with Larry opening by telling us; "that sometimes we find ourselves in positions and be prayerful and stay focused and that our day will come". This reminds me of Paul Kelly's Bullseye album.