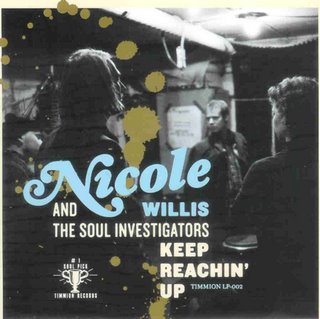 Inside cover of Nicole Willis & The Soul Investigators Keep Reachin' Up

I am bit late with this one but since I picked it up I haven't had it out of the player. I had grooved to the 45 "If This Ain't Love" since I first heard last year at the one of the Orwell nights in Wigan UK. However, when I heard the CD played on Richard Searling's Soul Sauce show on Smooth FM UK, I just fell in love with those retro grooves. The whole album sounds fresh and exciting and as Timmion's site says "independent record labels make good music".

I appreciate that this music is derivative but in comparison to some of the garbage masquerading as soul music these days then I prefer to go back to the roots with albums such as the Soul Investigators have produced.

If you want to hear tracks from the album then drop by Timmion Records. There are also fine photos on the site of Nicole gigging with the Soul Investigators

You can find out more about Nicole on her website.

Nicole and the gang are doing a short tour of the UK as follows:-

Let's hope more dates are announced but seeing that this is one of the best albums of the year so far, and is going to be hard to be bettered, then they will be back in the UK soon I bet!!!
Posted by Keeping Soul Alive at 5:30 PM