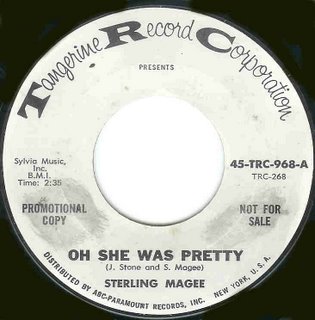 There are an excellent set of notes on Sterling Magee in the Ace Records The Arock & Sylvia Soul Story by Ady Croasdell. They tell the story of the above 45's which were all recorded in New York at the Al Sear's studio in the mid-60's and also provide some brief autobiographical details on Sterling as well as telling the story of his transformation into Satan. The Tangerine tracks were leased to them because of Al Sear's involvement in A&R in LA at the time.

"Oh She Was So Pretty" is a primitive sounding R&B style number with cracking vocals from Sterling Magee written by him and Jesse Stone. Sterling's rough bluesey vocals tell us the story of the pretty woman he desires who is just out of reach but though she is pretty she intriguely has "ugly ways" which we never discover! Apparently the muted horns were added in LA to beef up the primitive production.

The Ace CD not only contains the driving "Keep On", which was popular sound on the early Northern Soul scene in the UK, but the unissued "You're Supreme" which is another R&B beater.

You can find some pictures of Sterling here and a feature on him in the St Petersburg Neighbourhood Times .
Posted by Keeping Soul Alive at 7:31 PM