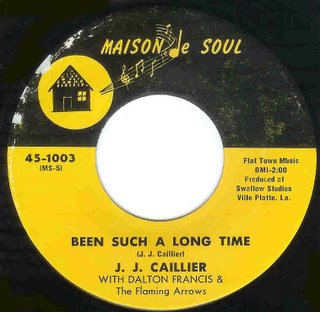 The other side of this 45 "I Got A Groove" has garnered interest on the UK funk scene and has been released on Kent's CD Louisiana Funk.

However, though I like the swamp infested offbeat funk of "I Got A Groove" and I originally picked this up in the early 80's for the sing along other side "Been Such A Long Time" which has Dalton Francis & The Flaming Arrows laying down a real cool groove to bop a long to!

Maison De Soul was out of the Ville Platte area north of Layfette, Louisiana. I do have a few other sides on this label - Frank Turner and Irma Thomas spring to mind.

I don't know much about JJ Caillier though I do have another 45 by him called "Pusherman" on Jay Cee which is Lafayette label. I love this tune which is anti-drugs plea from the early 70's and it sits nicely alongside Prince George's "Wrong Crowd" on DPG. Both these 45's were played on the UK rare soul scene in the late 70's.

There is an artist called JJ Caillier who is a zydeco singer around to this day but I don't know whether it is the same person as recorded for Maison De Soul and Jay Cee. I wonder whether there are any other 45's out there by him?
Posted by Keeping Soul Alive at 4:55 PM