Persuaders Made To Be Loved It's Soul Time Records 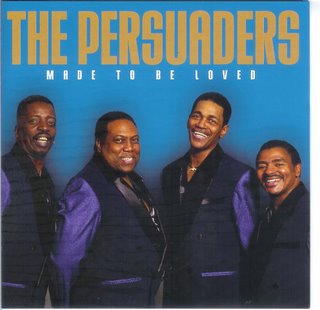 The Persuaders were one of the best vocal groups of the 70's with their Atco and Calla releases creating one of the finest group soul records of all time in "Thin Line Between Love And Hate".

The good news is that their new CD recalls those golden days of the 70's even though the group has been through a variety of personnel changes. The group currently consists of Alexander Brown, Richard Pointdexter, Tony Riley and David Turner.

UK soulster Andy Lothian set up It's Soul Time Records back in 2004 and he initially issued a 45 on the Persuaders "Hypnotised"/"Mama" which are featured on the CD.

The CD is a 13 tracker and though there is programming put that to one side because the harmonies are top notch and the original songs from the pen of Richard Pointdexter are class.

Let me take you through the CD:

A Woman Was Made To Be Loved

A strong opening number with Tony Riley taking lead with some beautiful harmonies from the rest of the guys. This song just sways from side to side on the groove laid down and the harmonies make this such a memorable number in celebration of the ladies of the world!

A midtempo slice of sultry soul harmony with David Turner on lead who delivers a sweet slice of singing with the guys beautifully backing him up as he tells his lady that he will always love her.

Don't Think I Won't Leave You

A slow atmospheric number with acoustic guitar and thunder sounds opening before Tony comes back reminding me of Randy Brown in his style of singing. This is such a strong side about a tale of love where if his woman doesn't stay faithful to him he is off.

David Turner talks over the intro telling us about his woman before breaking into a wonderful sweet performance again with strong harmonies.

All Up In Your Love

The guys chop it up with this slightly funky number with Richard taking lead over a mellow groove.

David Turner sings with passion about the passing of his mother and how we should never take our mothers for granted.

Another mellow groover with David on lead.

This could have been corny but it is such a beautiful song that you cannot fail to fall for it! The soulful sounds of David backed the guys are what make it so beautiful. There is a bit in the middle where they break down into a Dramatics type bag which is marvellous and Maurice Watts lends his voice on the wedding vows.

You're The Best Thing

Tony Riley's baritone lead is strong on this remake of "Best Thing That Ever Happened To Me" reminding me of the Dells and The Dramatics.

This Time Next Year

A beaty stepper which effortlessly floats along with repeated harmonic refrains from the guys.

Alexander Brown provides the falsetto on a song that has you tapping a long as the mellow groove just gets to you.

I Don't Think So

This has a more modern feel with it choppy rhythm and programming but the singing from Tony is pure Teddy Pendergast meets Randy Brown. This track is one of my favourites on the CD because of the strong singing and the groove created which had me clicking my fingers and bopping around.

A House Is Not A Home

Richard Pointdexter steps up on this remake of the classic Bacharach classic and does it to death again in a style which recalls the Dells. It is hard to believe that in 2oo6, people are still creating such wonderful harmonies.

Richard sings another classic that he wrote for Linda Jones and from the roll of the drum machine at the beginning you know that this is going to be a killer side. It is always hard to follow certain versions but Richard's interpretation of his own song is truly uplifting and when he lets go towards the end it is spine chilling.

This sees original group member Willie B. Holland joining the guys on a social message on the behalf of the people. We are back with the social consciousness songs of the early 70's which are still needed today in a society which never listens to itself and lets itself be destroyed.

All I can say is get out there and buy this CD because it has the In Dangerous Rhythm seal of approval!

You can get it from Soul Brother Records in the UK.
Posted by Keeping Soul Alive at 10:44 AM