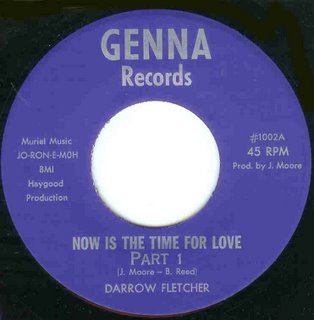 Just thought I'd pull March's posts together with a playlist of 20 sides which reflect my soul diary over the last month. The diary is mostly inspired by the music I am listening to or the people I have talked to or the news I have heard.

Here's the 20 for the month in no particular order:

A mesmirising and shimmering piece of early 70's Chicago magic which makes you wish there was a 12" version. Read post

The opening bars played on violin similar to Betty Lavette's Calla classic "Let Me Down Easy" had me hooked from the beginning. Then the band power in with a driving beat full of wah wah and tom toms before Nicole seduces us with her voice. Just get on the dance floor and feel free!! Read post

3. Darondo Sure Know How To Love Me Luv N' Haight CD

Raw and delicate at the same time with a lovely backing singers over an early 70's Al Green type groove but Darondo is his own man. Just hear how he squeals "Baby" - this man show knows how to love. Read post

4. Mark Murphy Why Don't You Do Right? Riverside

This has seems to have uplifted me more than most tracks this month in which the weather has certainly made it a long cold one. Read post

I'm still reading the book about his time as Satan - the simplicity of this song is so infectious and wow does the beat stay there! Read post

Infectious rhythms from Lonnie which was a new track for me off the Gilles Peterson Brownswood USA Luv N' Haight CD. Read post

The one I keep coming back to because it is so beautiful. Read post

This uptempo song will be out shortly on the Ace Records collection called "The Goldwax Years". Read post

My whiskey drinking days might be over but this piece of pounding soul is well locked in to the memories inside my skull. Read post

I always stick this driving instrumental on the turntable when I am feeling down and want to blast the blues away - this is what I would play if I could play the guitar well!!! Read post

11. Precisions Baby You're Mine Inferno EP

As it turns out this is not the Precisions - they didn't know who it was and neither did Lou Ragland the writer - as they told people who went to the recent Prestatyn Weekender in the UK. Never mind it is great track. Read post

12. Persuaders I Don't Think So It's Soul Time CD

Looking forward to meeting the guys in NJ this April and harmonies don't come better than on this CD - so hard to pick a favourite! Read post

I really enjoyed talking to Larry on the phone and I will be writing up the story behind this CD in the near future. I always loved this Brian Auger song and this is done with such bravado! Read post

This piece of funk just gets under my skin! Read post

I had missed this track with Freddie on vocals which is an early 70's beater. Don't forget to drop by the Freddie Hughes blog. Read post

16. Randolph Walker Everybody's Trying To Get Over RW CD

Watch out for my interview with Randolph in a future post over on Dark End Of The Street. This song was originally intended for Sam Dees and his version is included on a new CD by Ace Records called "Holding The Losing Hand: Hotlanta 3". Read post

Hannibal told me so much in our chats such as Kim Tolliver is on backing vocals with Delia Gartrell on this track from the late 70's. I will be featuring Hannibal in NSoul in the Summer edition and posting other material over on the Dark End Of The Street blog. Read post

18. Hermon Hitson Why Is It Taking So Long Soul-Tay-Shus CD

A killer which remained in the can from the 60's with the soul wrenching vocals of Hermon tearing our hearts out. Read post

A surprising discovery on one of the world's rarest funk album - a wistful ballad which is beautiful delicate lead - Raymond Smith - and harmonies from the guys on backing. Read post

This is mock Motown 1970 track was new to me and very catchy with some gritty lead from Cynthia Fox and originally released on Zells. Read post

They are just a selection of the music featured over the last month on the blog. Thanks to everyone who has dropped by via the blog, e-mail and the phone.