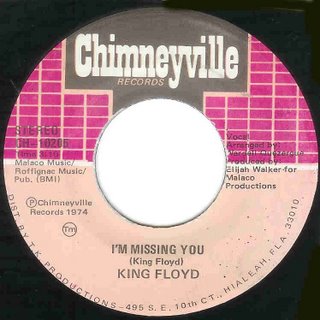 There had been rumours last week that he had died but I waited until something official was posted before announcing it on the blog.

He died on March 6, 2006 aged 61 from a stroke and complications from diabetes in a hospital in California.

He is best remembered for "Groove Me" which was the epitome of the Malaco sound in the 70's and which was a huge hit for him. Check out an interview with Malaco producers Wolf Stephenson and Tommy Couch talking about the Malaco sound and King Floyd.

I have picked out my favourite side by him "I'm Missing You" which is a ballad in the style of Clarence Reid or Swamp Dogg. It is a haunting self-penned side telling of his lost love and a fine testament to another lost soul brother.

If you wish to read more about King Floyd then Jeff Hannusch's "I Hear You Knockin'" book is a still a good source even though it was published in 1985. You should be able to pick a copy up from Amazon.

My friend Curt Obeda worked with King Floyd back in 1997 and you can read a review of King Floyd with the Butanes here.

Check out another reminiscence on King Floyd from Phillip Raul .
Posted by Keeping Soul Alive at 6:15 PM